5 facts about the arrival of Disney Plus in Mexico

5 facts about the arrival of Disney Plus in Mexico

As we know, yesterday (November 17) the Disney streaming platform arrived in our country: Disney + (Disney Plus). Not only did it reach Mexico, it also reached 9 more Latin American countries: Argentina, Brazil, Chile, Colombia, Costa Rica, Ecuador, Panama, Peru and Uruguay. Unlike other platforms, it arrived in Latin America months after it has been presented in other parts of the world, such as North America.

Disney Plus presents content from different brands (all from the Disney conglomerate) that we already know: the classics with the Disney seal, the animation ones by Pixar, those of Marvel superheroes, those of one of the most important fandoms : Star Wars and the famous National Geographic documentaries. Analyzing the conversation in various media, we discovered some interesting insights that we will list below.

1.The advertising was in digital media

We know that the nature of this streaming platform is 100% digital, however, Disney has been characterized as a very traditionalist company. Characterized by an advertising strategy in multiple media both online and offline, however, for Disney Plus, practically all advertising has been online (except for some billboards in certain cities and hotspots, such as in the famous Times Square in New York and that was months behind). Using all possible tools, you have probably seen advertising even in your email (through retargeting). We detect advertising on YouTube, Facebook, Twitter, Instagram. No major social network has been spared from the Disney Plus hype.

Disney Plus made an investment to put up a sponsored trending topic , to start the conversation. Days before the platform was enabled in the country, the audience was already talking about it. Especially young people between 25 and 34 years old. Just the generation that was raised on content developed by Disney.

3. The arrival of Disney Plus was to the liking of the audience

The overall conversation has been positive, just look at the posts with the highest number of interactions. Fans hoping to see, among other things, the recent live action adaptation of Mulan, “The Mandalorian”, a LucasFilm television series from the world of Star Wars, especially for the character that has caused much admiration: Baby Yoda. The first Marvel universe television series created for the platform is also expected: WandaVision. Following Netflix’s strategy of creating exclusive content for its streaming service, Disney Plus has taken on the task of creating WandaVision, centered on one of the most popular Avengers characters: Scarlet Witch – Wanda Maximoff.

Emojis most used in conversation

4. Influencer Marketing to reinforce the “desire” in the audience

The truth is that nobody is surprised that Disney Plus has decided to use influencers to promote its service, but there is something surprising in its influencer marketing strategy, and that is that it has not only hired “macro influencers” who have hundreds of thousands of followers, but also to the micro, who have between (5,000 and 20,000 followers but generally a greater interaction and credibility with their followers).

All of them used the hashtag #loprimeroquevoyaver, which although it was not a trend, it did generate desire and envy from their followers. Especially in the case of influencers who showed in their instagram stories or tweets on Twitter, the subscription for a year that they were given or the kit that was given to them by Disney Plus. 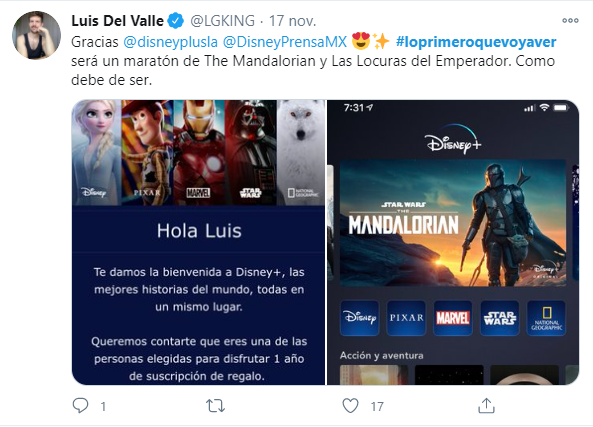 5. Integration of the Disney ecosystem

The brand coexists in a Disney ecosystem. When talking about “Disney +” digitally, it is not uncommon for us to see other brands such as Radio Disney and other channels of the brand not included in the platform. Whether it is something done by the audience or promoted by the brand, the fact is that Disney brands coexist with each other in the same ecosystem. In fact, The Simpsons are also part of this Disney brand environment, and it was even used in advertising for the platform in the United States, however, having only 2 seasons, 29 and 30, the company has decided not to broadcast it nor space in your advertising communication. Some media report the intention of the brand to make the platform more “suitable for the whole family”, which could make sense,

Learn more about what your audience thinks using Master Digital Intelligence, MDI , the solution provided by Social Listening and the information you need from your audience, your brand and your competitors in digital media.